COLCOA is pleased to bring you the World Premiere of this high-concept farce about an unlikely romance. Clovis Cornillac plays a man, known only as Machin, who builds puzzles for a living. Creating his mind-benders requires hours of intensive concentration in solitude and silence. Mélanie Bernier stars as his attractive neighbor, a classical pianist known only as Machine. She revels in the constant sound of music and is currently rehearsing for a career-making competition. The provocative virtuoso poses a seemingly unsolvable puzzle for the short-tempered shut-in. Their apartments are separated by a few inches of brick wall – not nearly thick enough for the peace and quiet Machin needs, but far too thick for the companionship he secretly craves.

Actor/writer/director Clovis Cornillac had been mulling over ideas for his feature debut for five years. Then his wife, actress Lilou Fogli, came to him with a simple idea for a romantic comedy, and the two of them brought in collaborators Tristan Schulmann and Mathieu Oullion to complete the screenplay. Although this is his first time in the director’s chair, Cornillac has extensive experience on the other side of the camera, having won a Best Supporting Actor César for The Story of My Life(2004). He is perhaps best known stateside for his appearances in A Very Long Engagement (2004), Asterix at the Olympic Games (2008), and his star turn in Eden Log (2007). A former athlete, Cornillac trained for months to play the lead in the cycling film Tour De Force (2013), a film his co-writer Mathieu Oullion also worked on. Currently, Cornillac plays the prickly head chef in the French television series Chefs, two episodes of which will be screened in this year’s debut edition of the COLCOA Television Competition. 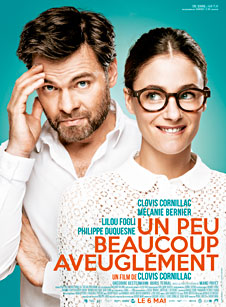