The feature-length sequel to the director’s powerful Oscar-nominated short, Just Before Losing Everything, Custody recounts the harrowing post-divorce custody battle of the abused wife and violent, controlling husband of his previous film. Masterfully employing an icy, hyper-realistic style, totally devoid of music (which has been compared to the films of Maurice Pialat, Alfred Hitchcock and Claude Chabrol), the thriller comes to a slow boil, as tensions build and the situation becomes almost unbearable. Léa Drucker and Denis Ménochet reprise the roles they played in Legrand’s short with great complexity and nuance, while newcomer Thomas Gioria brilliantly captures all the conflicting feelings and terrors of the couple’s traumatized 11-year-old son.
Xavier Legrand studied at the National Academy of Dramatic Arts in Paris and is an accomplished theater actor in France. He turned to screenwriting and film directing with his first short, Just Before Losing Everything, which was nominated for an Academy Award for Best Live-Action Short and won the César Award in that same category. The short was also honored with a Special Short Film Prize at COLCOA 2013. Custody, Legrand’s feature directorial debut, premiered at the 2017 Venice Film Festival, where it was doubly honored with the Silver Lion for Best Direction and the Lion of the Future for best first feature film. 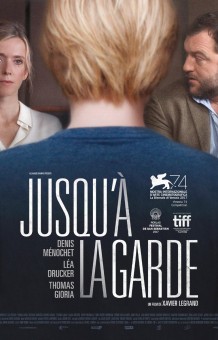