Celeste and Silhem are admitted to a rehab facility on the same day. Addicted to drugs, the otherwise-normal teenage girls form an indelible bond. That friendship becomes as much their salvation as an obstacle, when they’re thrown out of the facility for breaking the rules and are on their own, desperately struggling to stay clean and sober. That’s when the real battle begins — their struggle for freedom and rebirth. The semi-autobiographical film marks Marie Garel-Weiss’ feature directorial debut and was honored with the Golden Salamander at the 2017 Sarlat Film Festival and the Audience Award at the Saint-Jean-de-Luz Film Festival, where the film’s two radiant leads, Zita Hanrot and Clemence Boisnard, deservedly shared the festival’s Best Actress Award.

Marie Garel-Weiss | Self-taught writer/director Marie Garel-Weiss began her career as an intern, then as an assistant director. She and Vincent Ravalec co-wrote scripts for two short films — L’amour dans les saunas hétérosexuels and La vie de garçon (2003) — which she directed on a shoestring budget. She co-wrote The Return of James Battle (2004), directed by Didier & Thierry Poiraud, then Thierry Poiraud’s Goal of the Dead (2014) and Alone (2015). Garel-Weiss also collaborated on several mini-episodes of Michel Muller’s comic TV series, Un Film Sans (2009). She’s co-written projects for directors Fabrice du Welz and Cédric Kahn, as well as Hélène Angel’s Propriété Interdite (2011). Her adaptation of Jeunesse Sans Dieu by Odon von Örvath was directed by François Orsoni at the Théâtre de la Bastille. The Party’s Over is Garel-Weiss’ first feature film as a director. 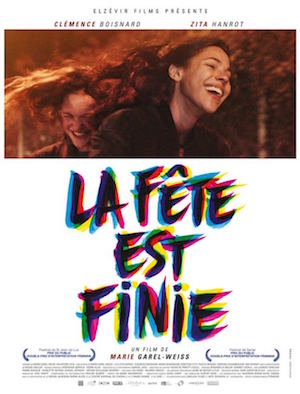